GET A DISCOUNT WHEN YOU SIGN UP TODAY! THAT'S 50% OFF EXCLUSIVELY FOR YOU...

The Economy and Real Estate market is shifting. These next few years are critical. Will you and your family SINK or SWIM?

I'm Going To Teach You How To Make Millions In Real Estate.

I’m here to make sure you swim, survive, and thrive in the tough times ahead using tried-and-true real estate investment strategies that have worked for me and thousands of other real estate investors like me for decades regardless of the economy and state of the housing market. It’s time to stop working for your next deal and put every deal to work for you.
Get Started Now!
As Seen On...

Realtors know how successful investing in real estate can be, yet you rarely see them investing in real estate themselves.
There’s a reason for that.
And no, it’s not because there’s some magical gold-dust that only elite investors have access to...
It’s not because all of the profitable investment opportunities have already been snapped up...
It’s because there’s a HUGE misconception when it comes to real estate investing, that causes realtors like you to come to the same old conclusion:
“I Have No Spare Cash To Invest”
“I Just Can’t Do It, I Have No Clue What To Look For Or Where To Even Start”
“Investing? Flipping? I’ve Only Learned How To Rent And Sell - I Guess That Rules Me Out”


There’s a reason for that.
And no, it’s not because there’s some magical gold-dust that only elite investors have access to...
It’s not because all of the profitable investment opportunities have already been snapped up...
It’s because there’s a HUGE misconception when it comes to real estate investing, that causes realtors like you to come to the same old conclusion:
“I Have No Spare Cash To Invest”
“I Just Can’t Do It, I Have No Clue What To Look For Or Where To Even Start”
“Investing? Flipping? I’ve Only Learned How To Rent And Sell - I Guess That Rules Me Out”

I’m Sure You’ve Heard By Now That In Order To Become A Successful Investor, You Need:

To inherit a property to make investing worthwhile

A large lump sum of money to get started

Some form of investing
education
When in fact?
You don’t need to be handed a multi-million dollar home.
You don’t need to strike lucky and win the lottery.
You don’t need to attend some posh expensive training academy.
You just need a simple step-by-step guide that outlines how to fix, flip, buy, sell, rent, invest and make a passive income whilst you sleep…
Without using any of your own money!
Get Started Now!

And This How I Went From A “Low Level” Employee Stuck In A Cubicle For 9 Hours/Day To A Full-Time 7-Figure Realtor & Investor!
It’s true…


I was one of those employees taking orders from the “higher-ups” who had this idea that they were far superior to us “low-level” cubicle workers.
I’m sure you can relate.
They walk around the office on their high horses, never to be seen doing a second of actual work.
They simply get a kick out of watching those around them do their job for them, for $20,000 less/year.
But one day, after being late to work due to reasons out-of-my-control, I was left feeling more powerless, angry, and helpless than ever before.
“Why are you late to work Chris?”
There was a car accident, I said.
“Ok, so why are you really late to work this morning Chris? Did the dog eat your homework again?”
That was the final straw for me.
I wasn’t going to be made to feel small, insignificant, and like the office joke.
I shouldn’t have to put up with this blatant disrespect, nor should I have to make myself miserable making millions of dollars for someone else.
“I QUIT”
Were The Next Words That Came Out Of My Mouth
That was the day that EVERYTHING changed for me, and my life, income, and overall happiness have gone up, up, up ever since.
Now, I know that the “I quit” method isn’t for everyone.
You likely have bills to pay, mouths to feed, and debt to keep on top of.
But here’s the thing…
So did I!
I didn’t have access to a pot of gold, nor did I grow up in a wealthy household.
I didn’t have access to any training, tools, or cheatsheets.
I didn’t have a CLUE what I was doing...
And unfortunately, there’s not a “how to make money in your sleep with real estate” guide…
Though, maybe I should write one now that I’ve figured it out!
Yet there I was, making over $100,000 in real estate less than 2 months after quitting my job.
And no - that’s not a typo.
I made more than my annual salary
Within 2 Months Of Quitting My Soul-Sucking 9-5 Job
Here’s how:


I brought a 10-acre farm in my hometown for $20,000 and sold it for $80,000 in less than 8 weeks, pocketing $60,000 in one transaction.
But here’s my “BIG SECRET”...
I didn’t really “buy” that 10-acre farm.
I didn’t have $20,000 just sitting in my bank, waiting to be spent.
In fact, I only had enough money to last two months tops when I left my 9-5 job.
But my passion, hunger, and desire for change mixed with my knowledge, strategy, and credit-hacking tactics meant that I figured out a way to purchase that property with the bank’s money…
AKA credit cards and lines of credit with my bank...
And I changed my entire life in six simple steps. 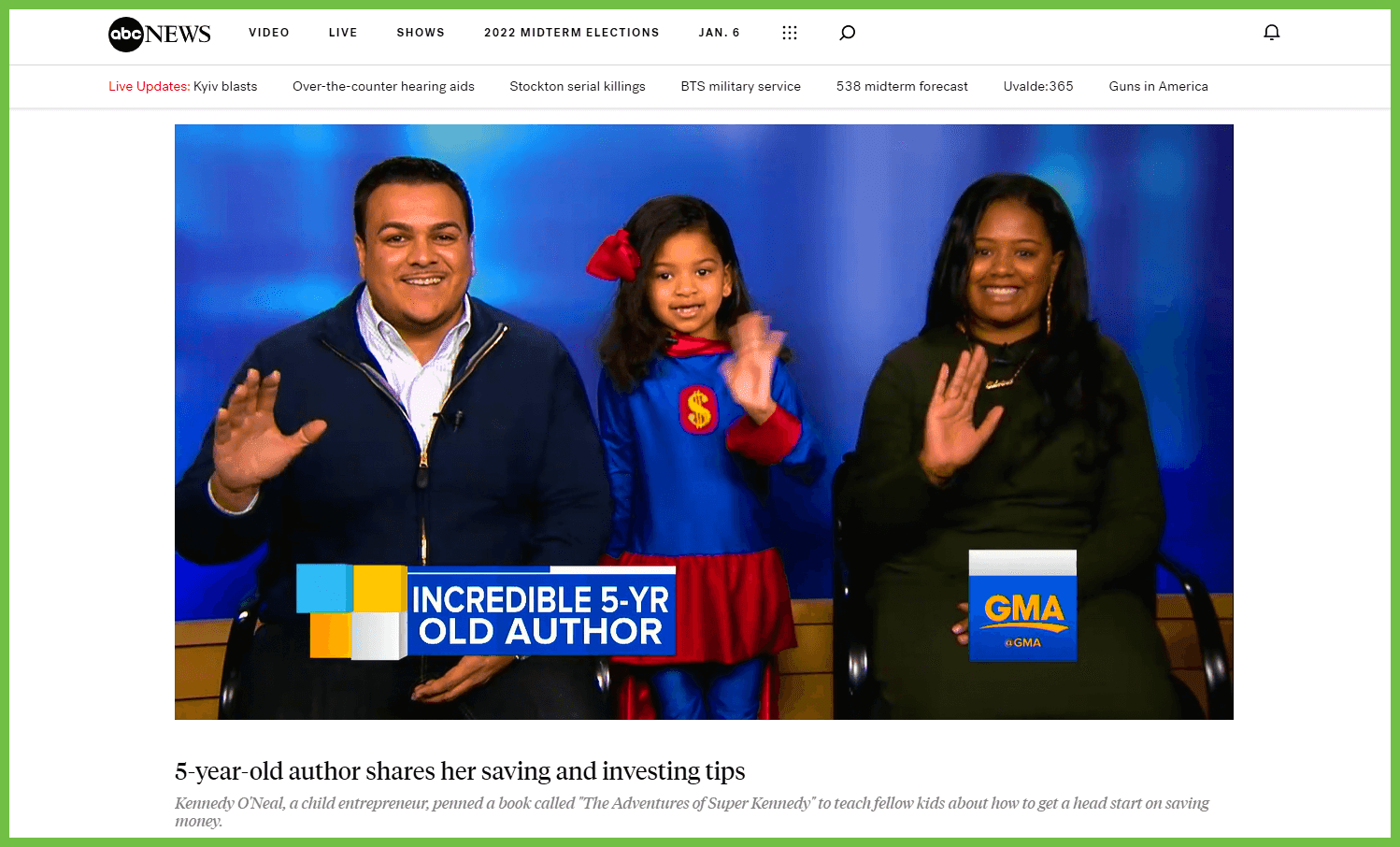 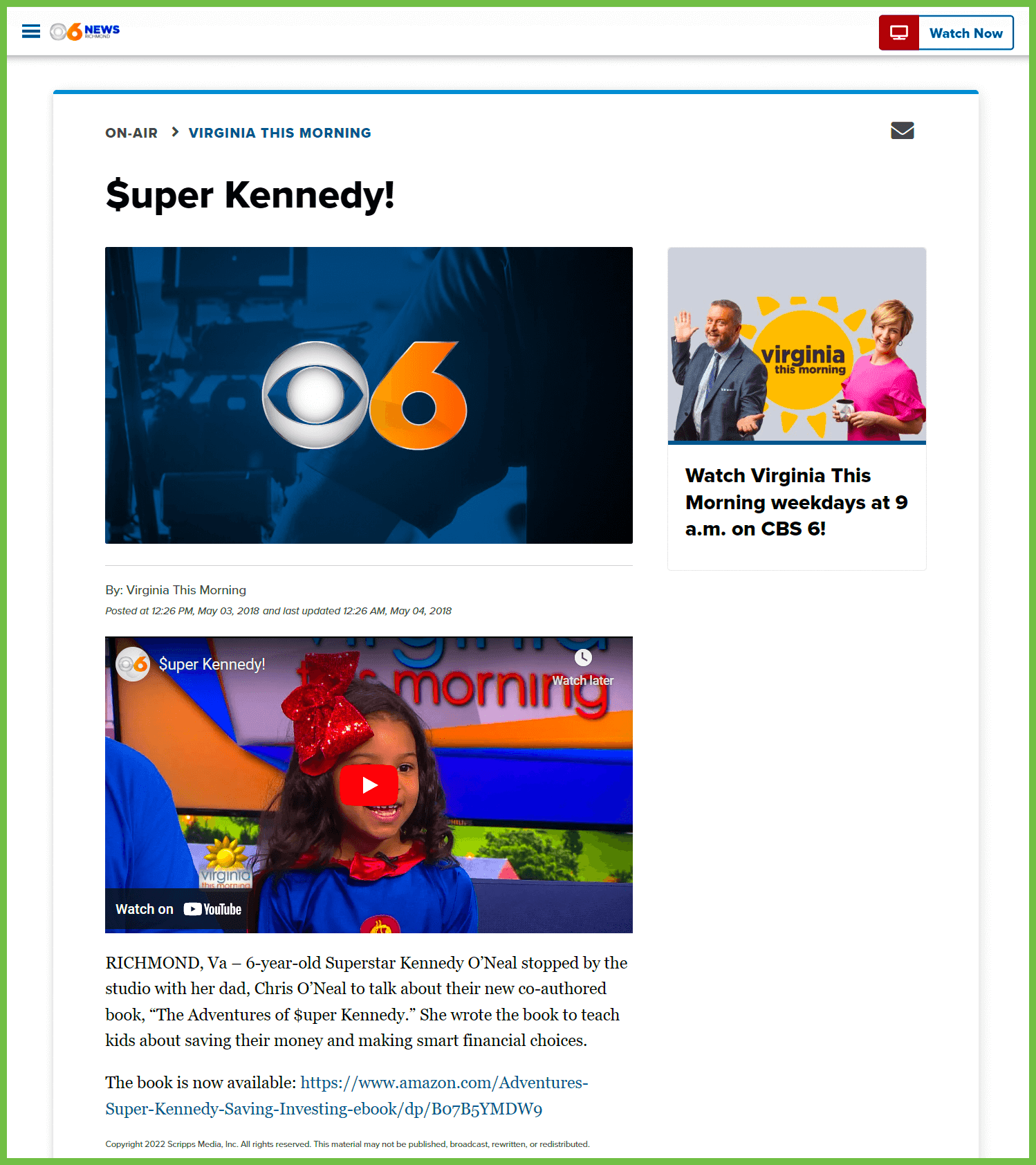 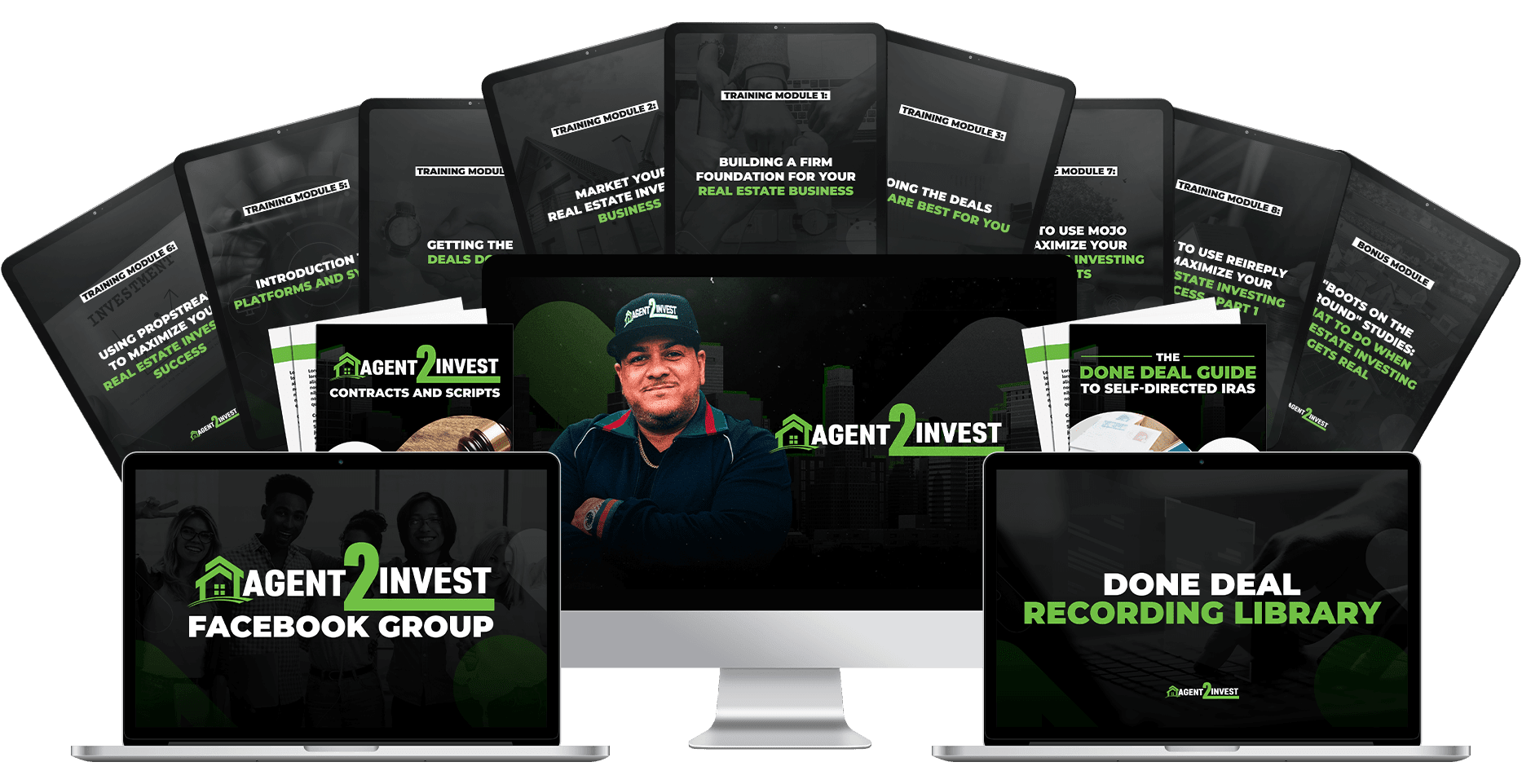 The ONLY online, video-based course that gives you my seven-figure secrets to life-long success and generational wealth with real estate - that anyone can duplicate!


I’m going to teach you EXACTLY how to transition from a poorly-paid, commission-based realtor… To a financially free, work-anywhere, 7-figure investor!
That’s a total value of $4,845!

Get Started Now!
But you must hurry! Enrollment at this low price is limited to just 100. When that limit is hit, the price will rise!


Don’t miss this chance to learn how to create multiple income streams so that you can quit your day job (if you want) and save more for retirement.

Here is What The Agent To Invest Masterclass Will Cover: 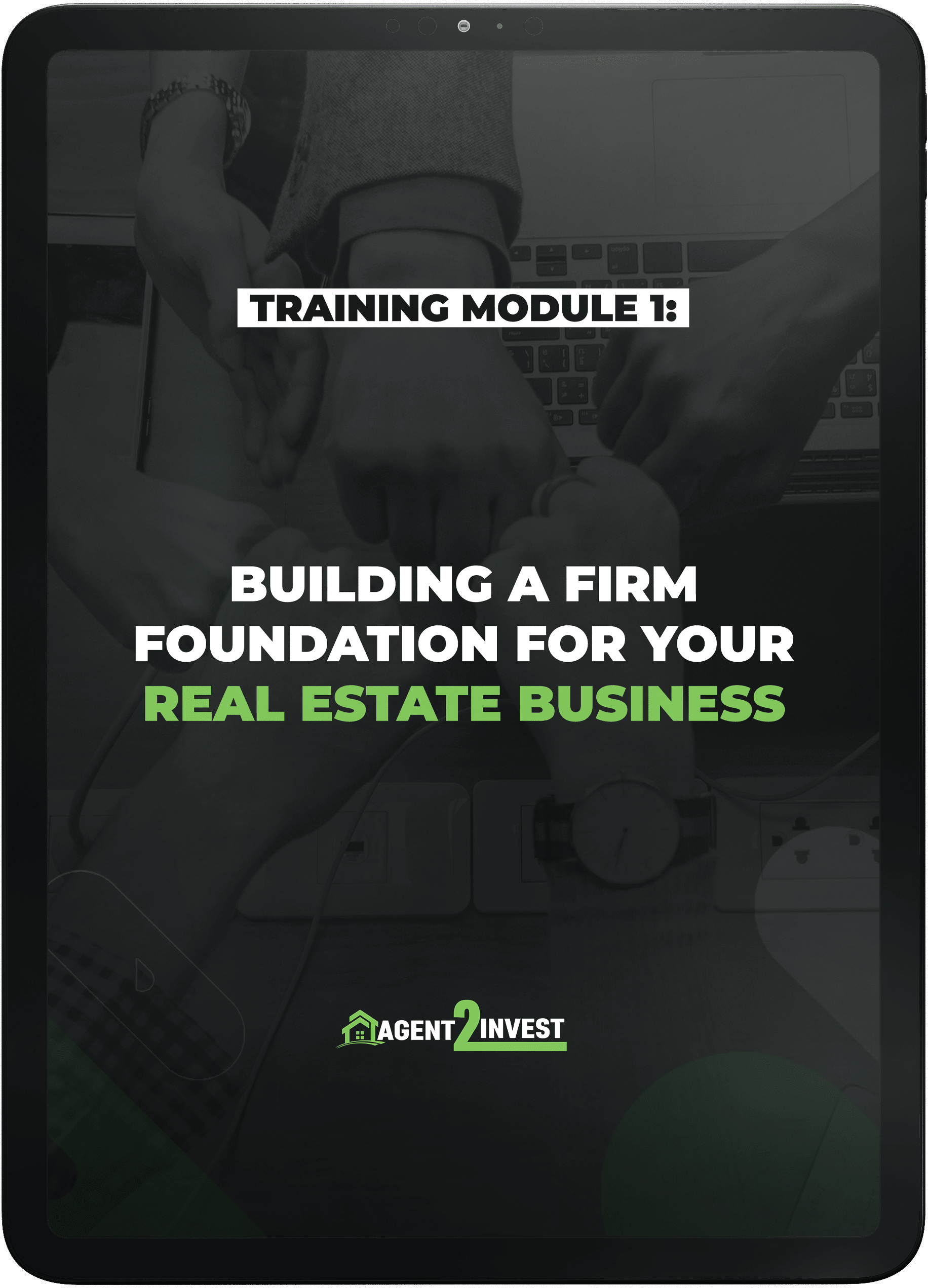 Module #1 – Building a Firm Foundation for Your Real Estate Business 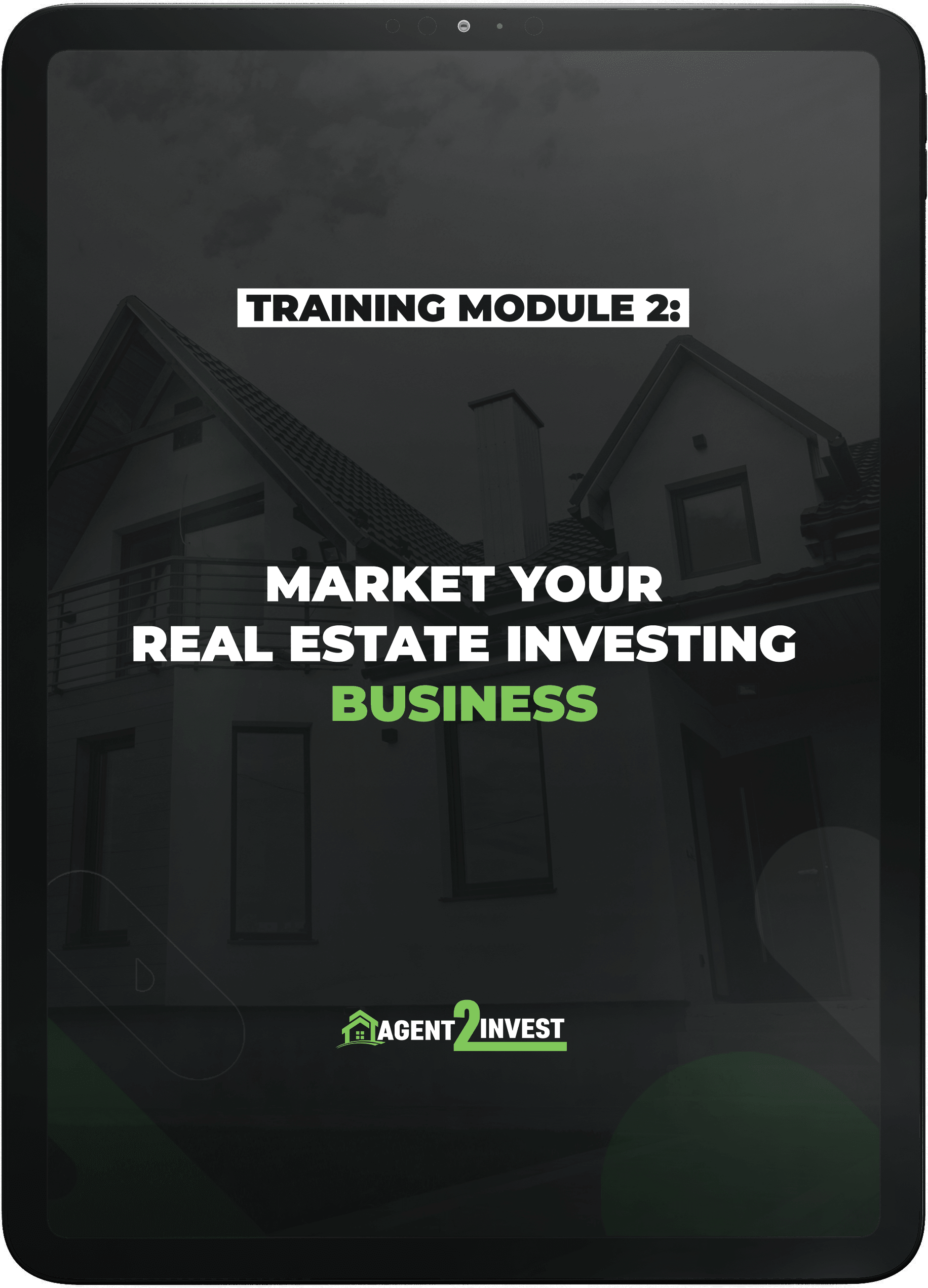 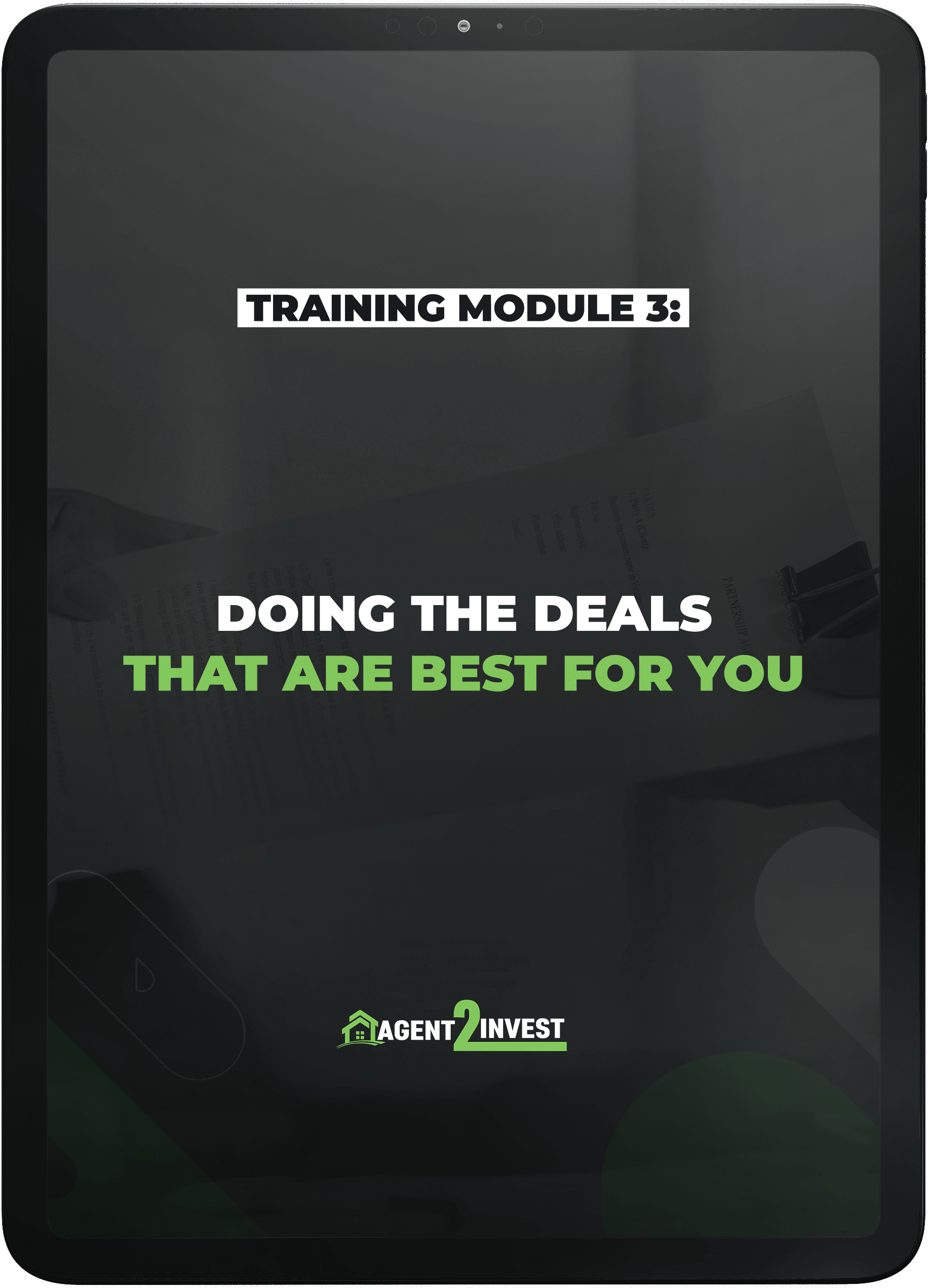 Module #3 – Doing the Deals That Are Best For You

Module #4 – Getting the Deals Done 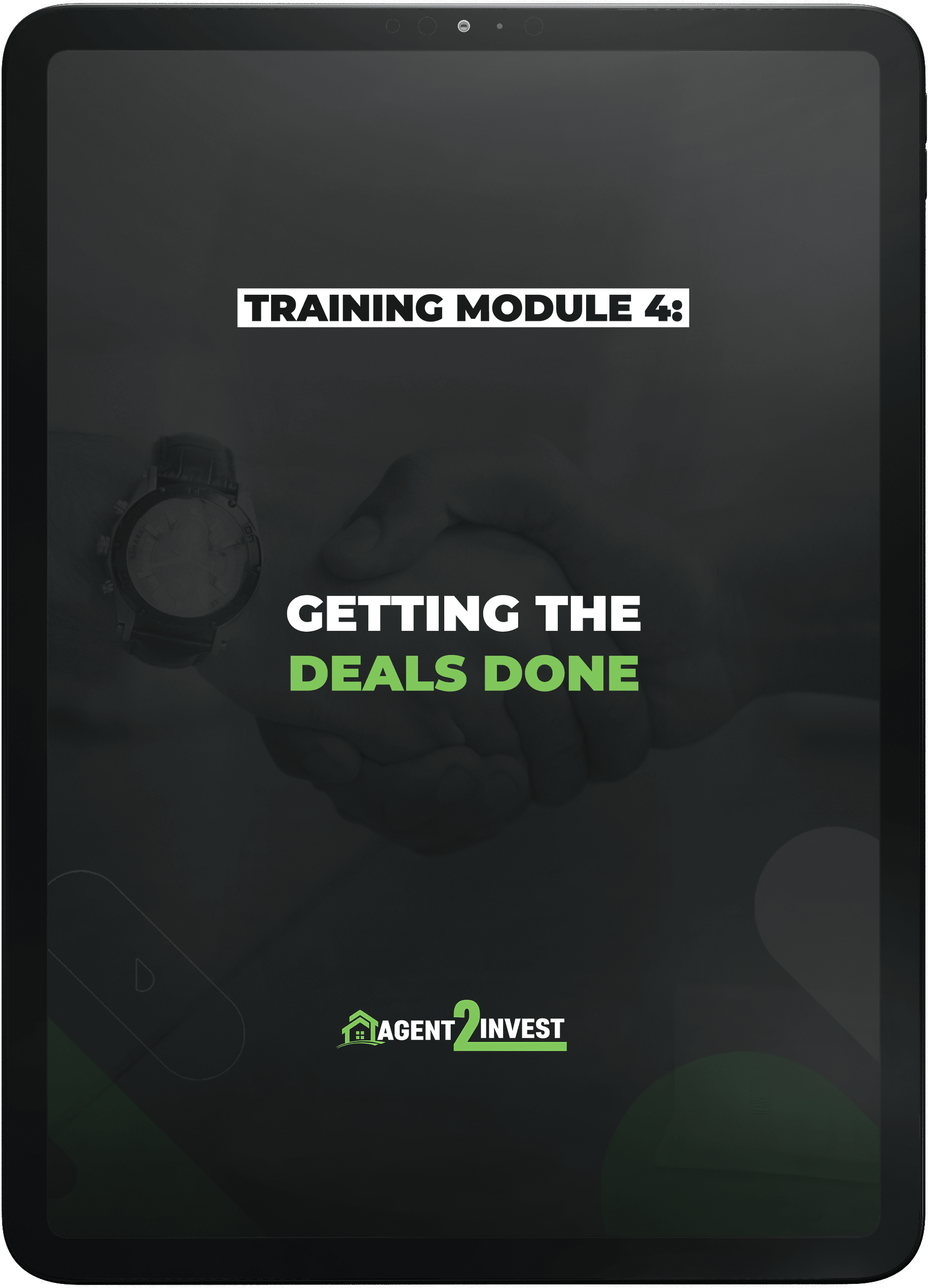 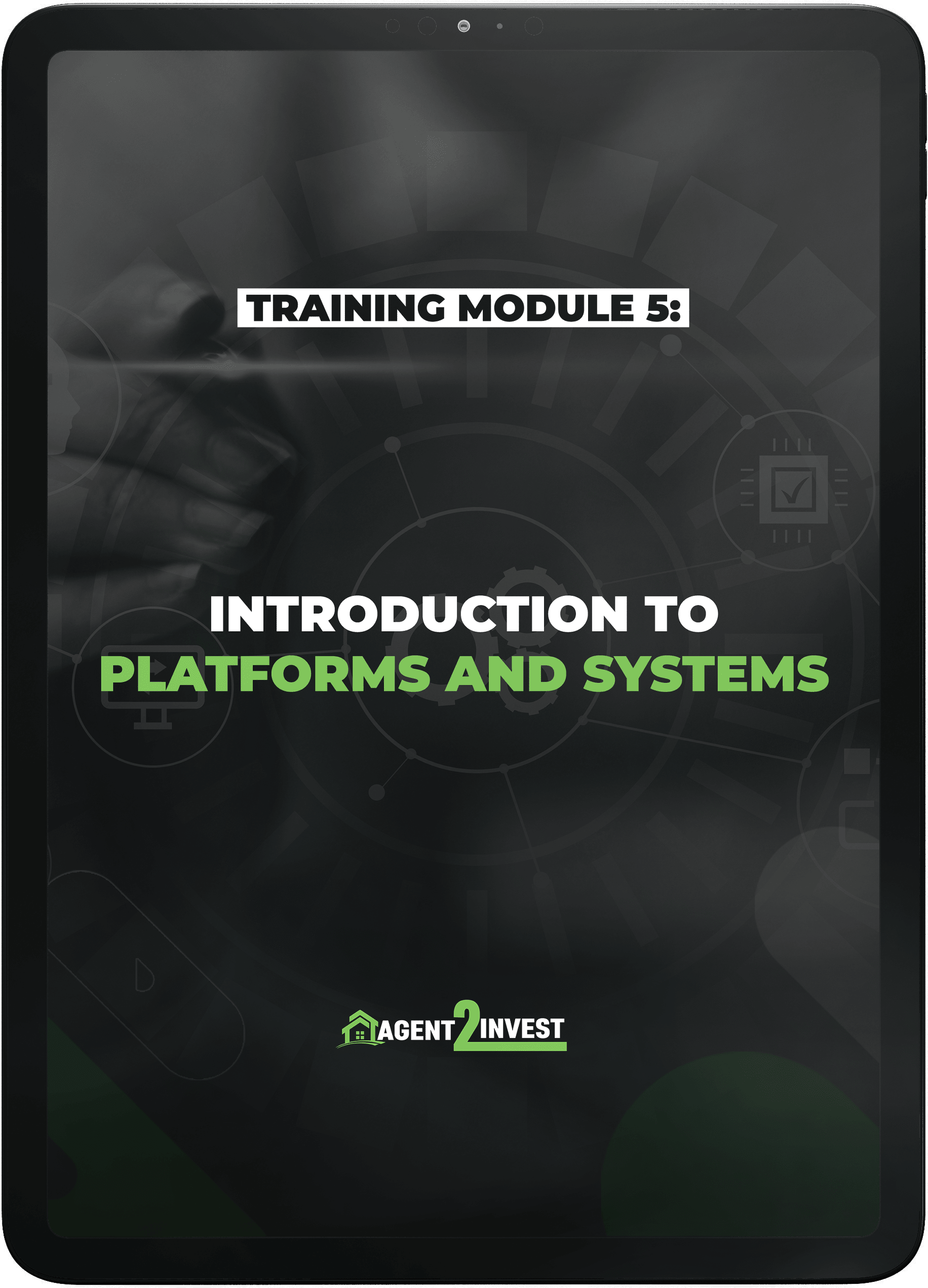 ​Module #5 – Introduction to Platforms and Systems 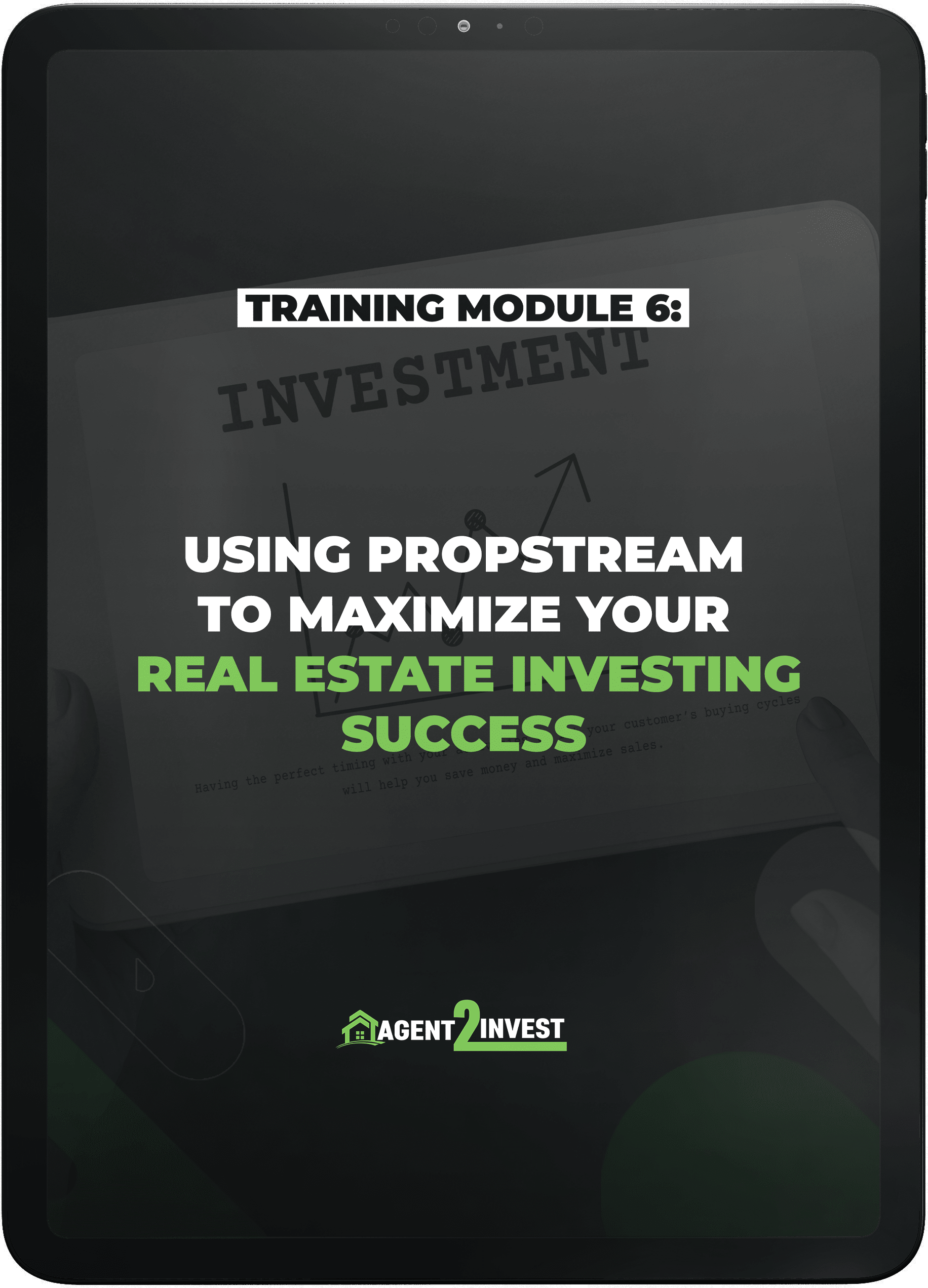 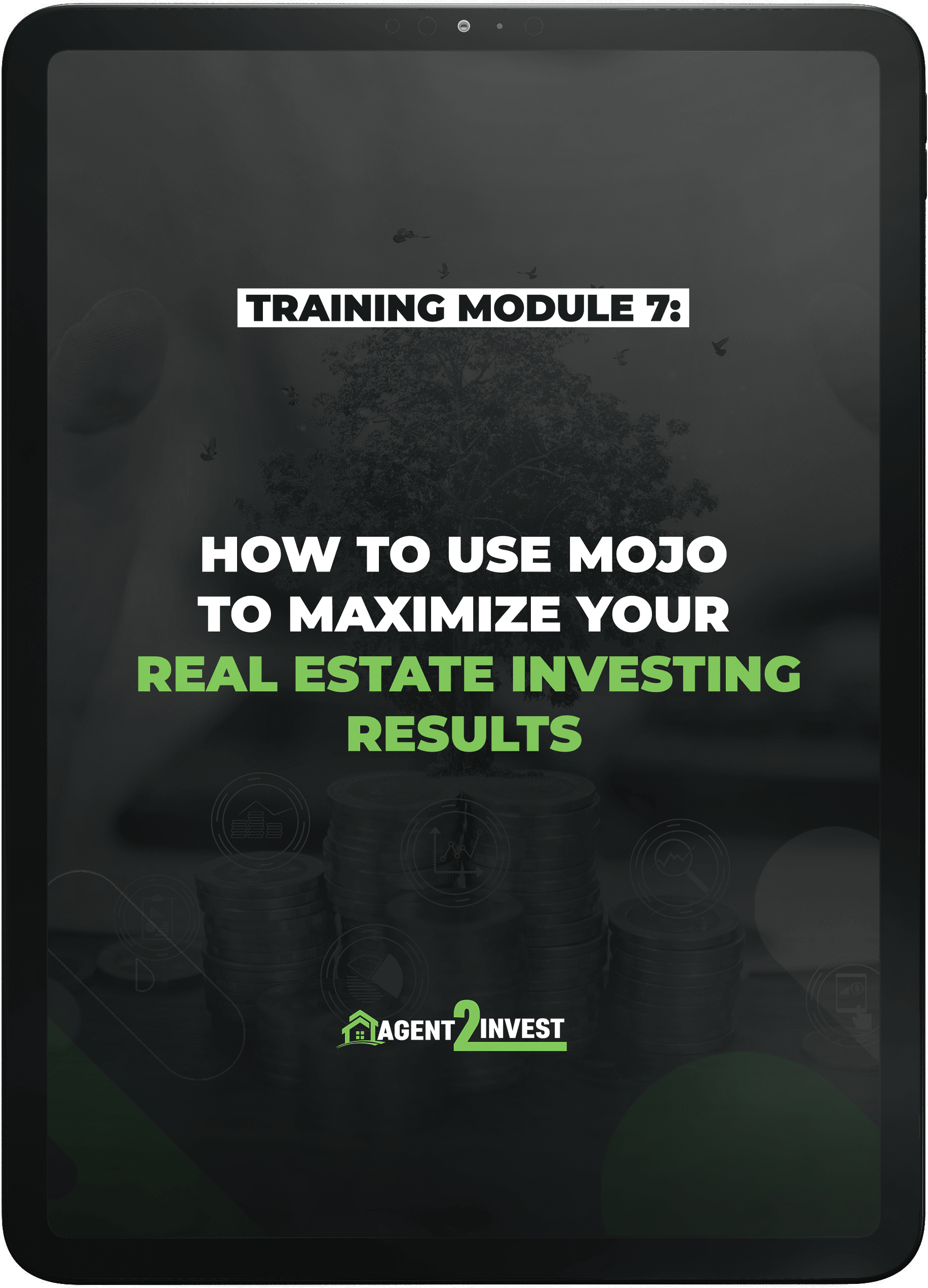 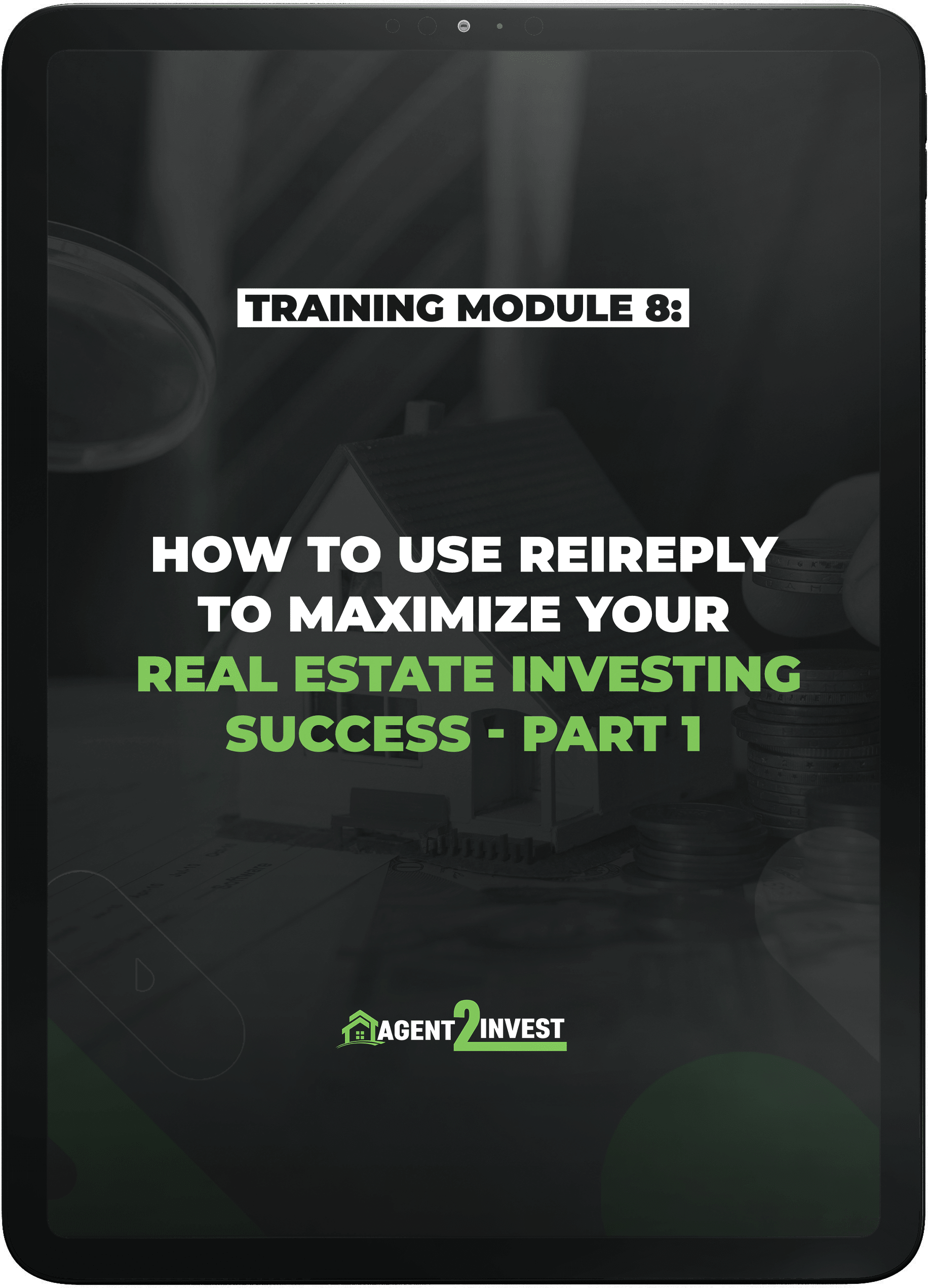 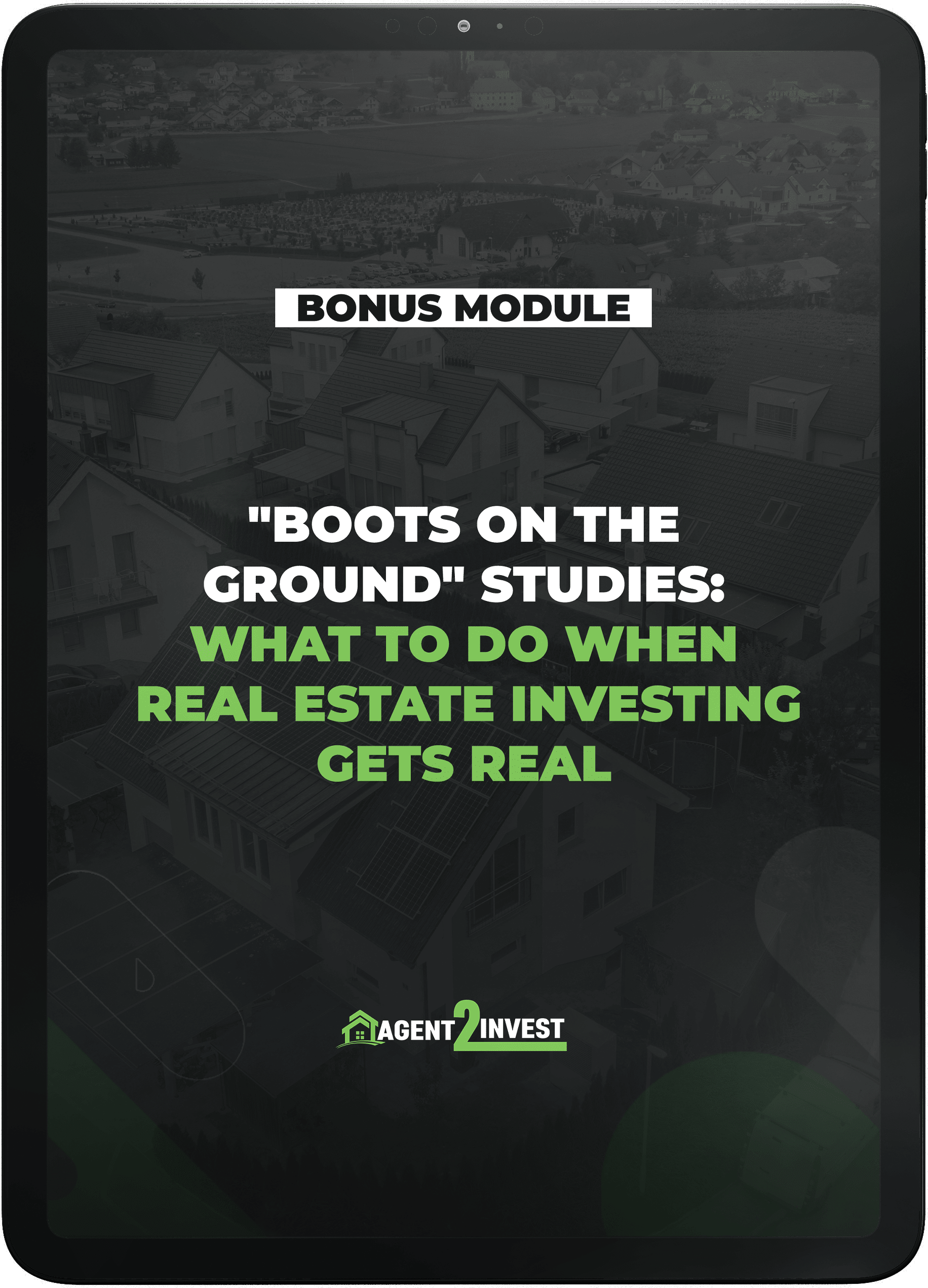 Bonus Module - "Boots on the Ground" Studies: What To Do When Real Estate Investing Gets Real

Plus, This Masterclass Training
Also Includes:

When you sign enroll in the Agent2Invest course with Chris “Done Deal” O’Neal, you don’t “just” get access to this incredible curriculum that provides a complete, open-book guide to every aspect of successful real estate investing, For a limited time, you will also receive these incredible bonus materials to help you on your way to investing success 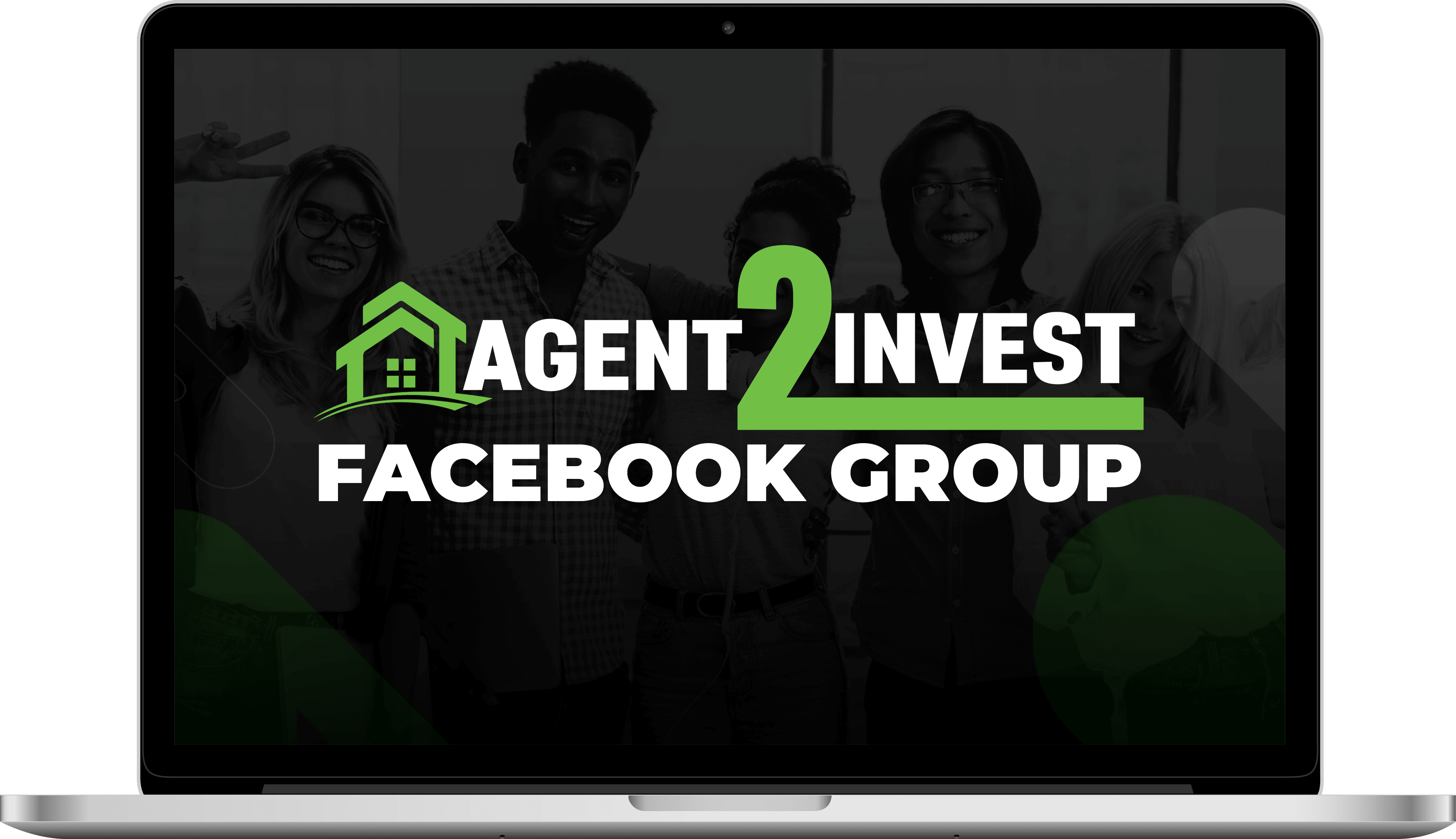 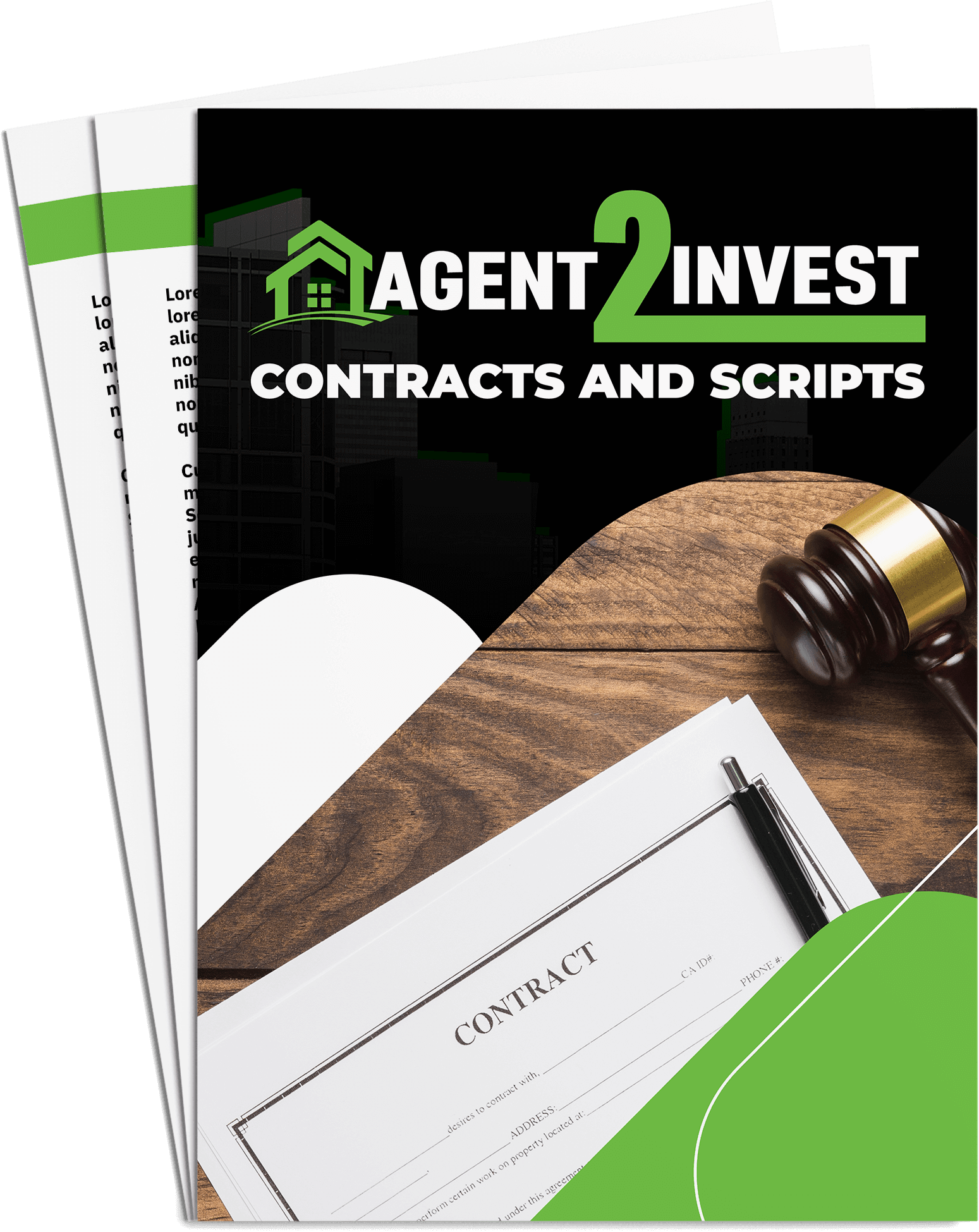 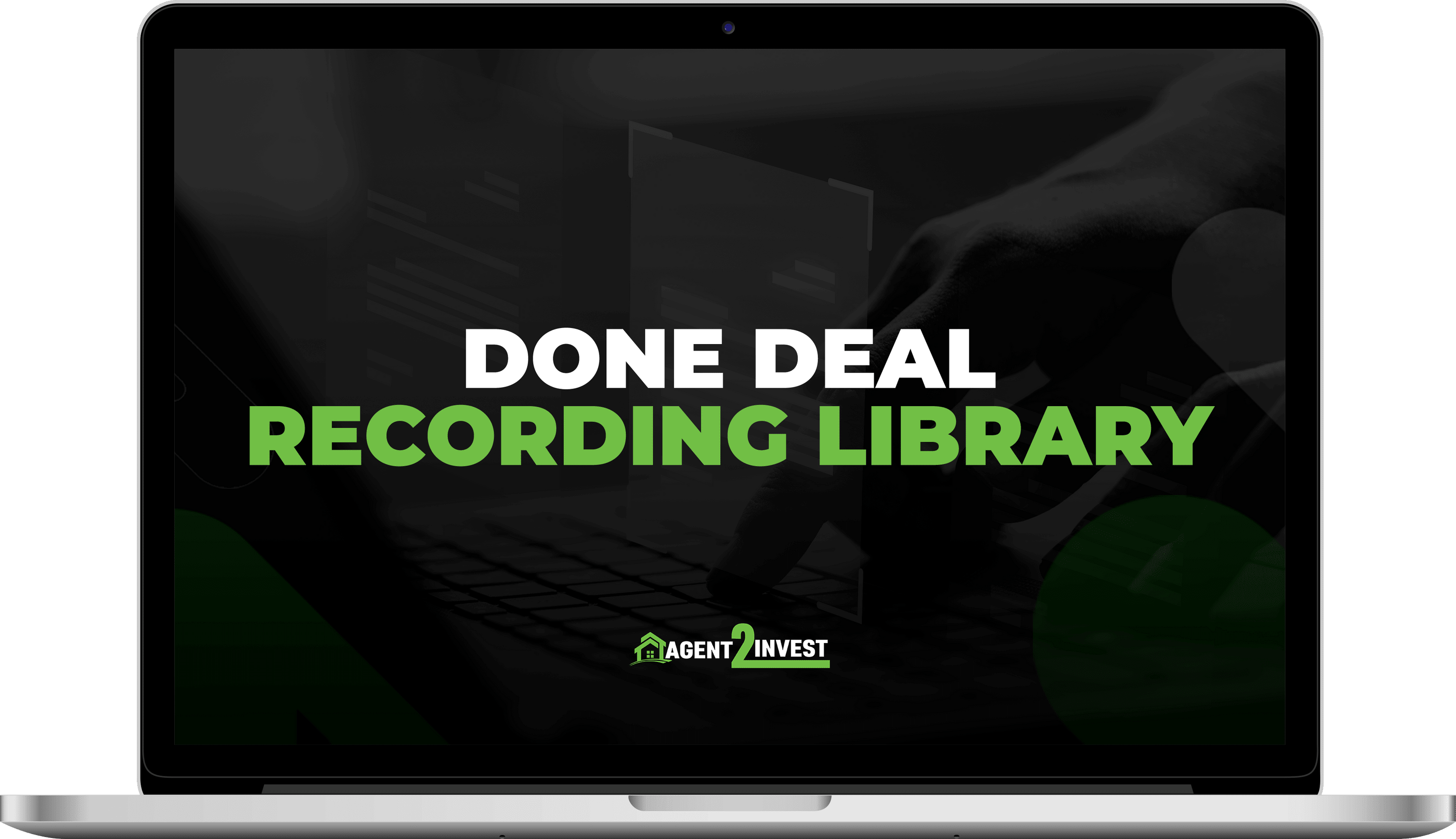 Access to the Done Deal Recording Library, where you can review Agent2Invest coaching calls recorded for your reference on demand 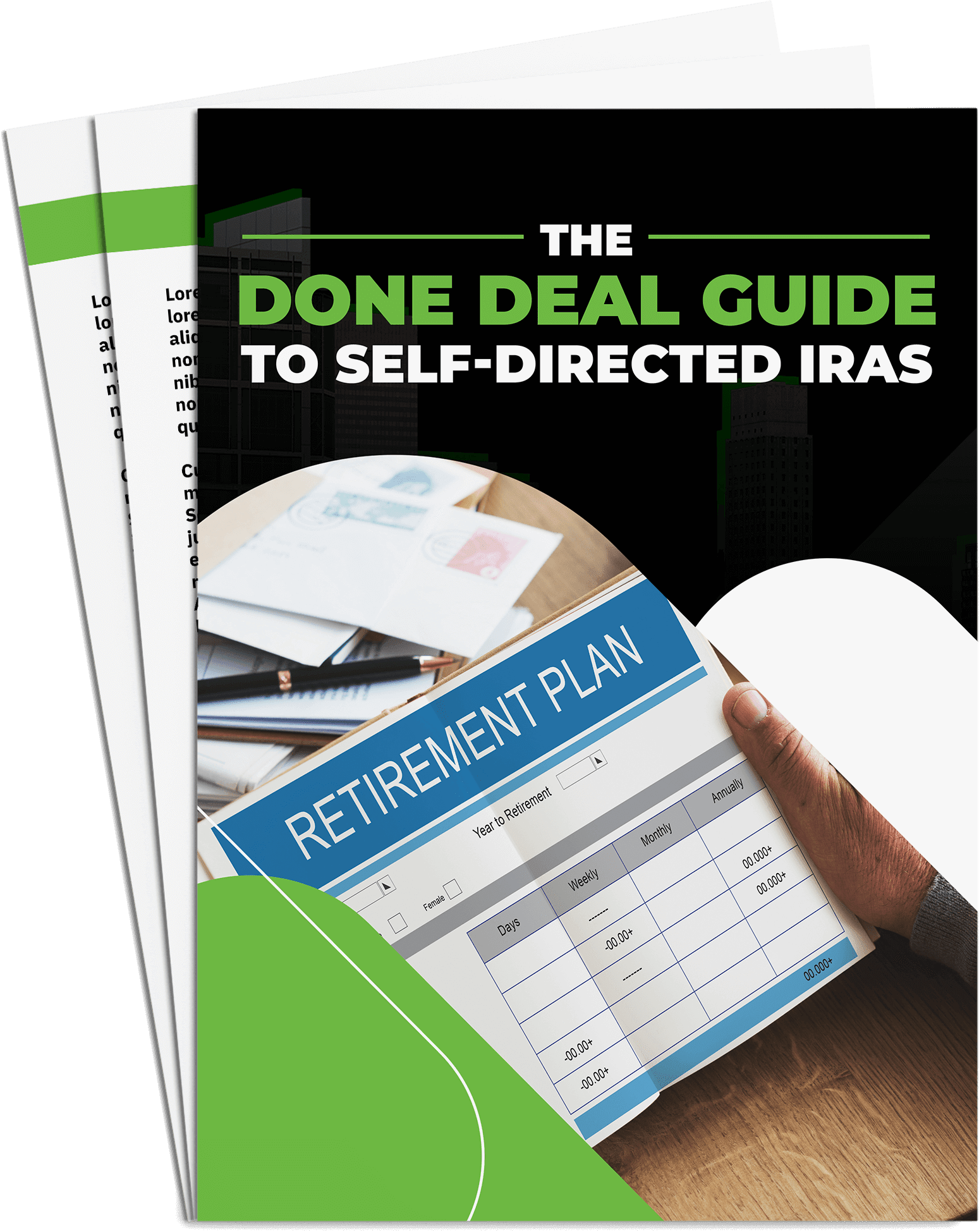 The Done Deal Guide to Self-Directed IRAs, Chris O’Neal’s quick-guide to using this incredible investment vehicle to optimize your returns, protect your assets, and create a tax-advantaged environment for your real estate investments
Total Value of the Extra Training Items & Bonuses is $678 …
Add that to the original course value of $4,845 …
and that’s a total of $5,523!

If You’re Committed, Driven & Ready For Change, Sign Up Now!

What Others Are Saying About Our Training: 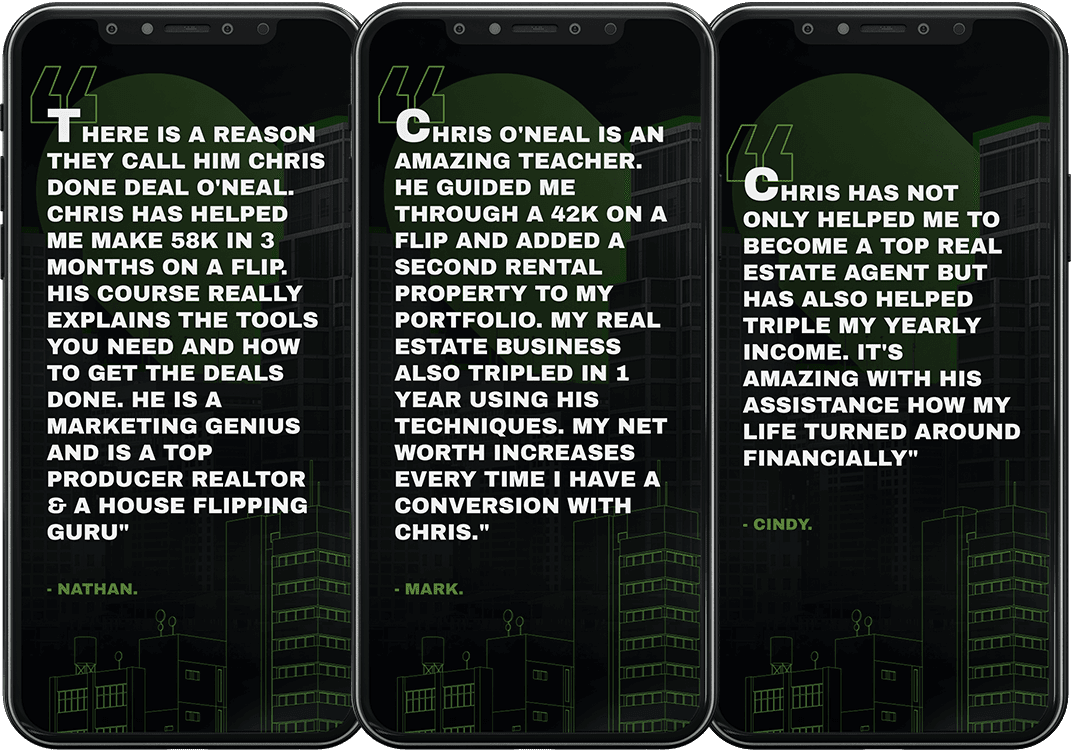 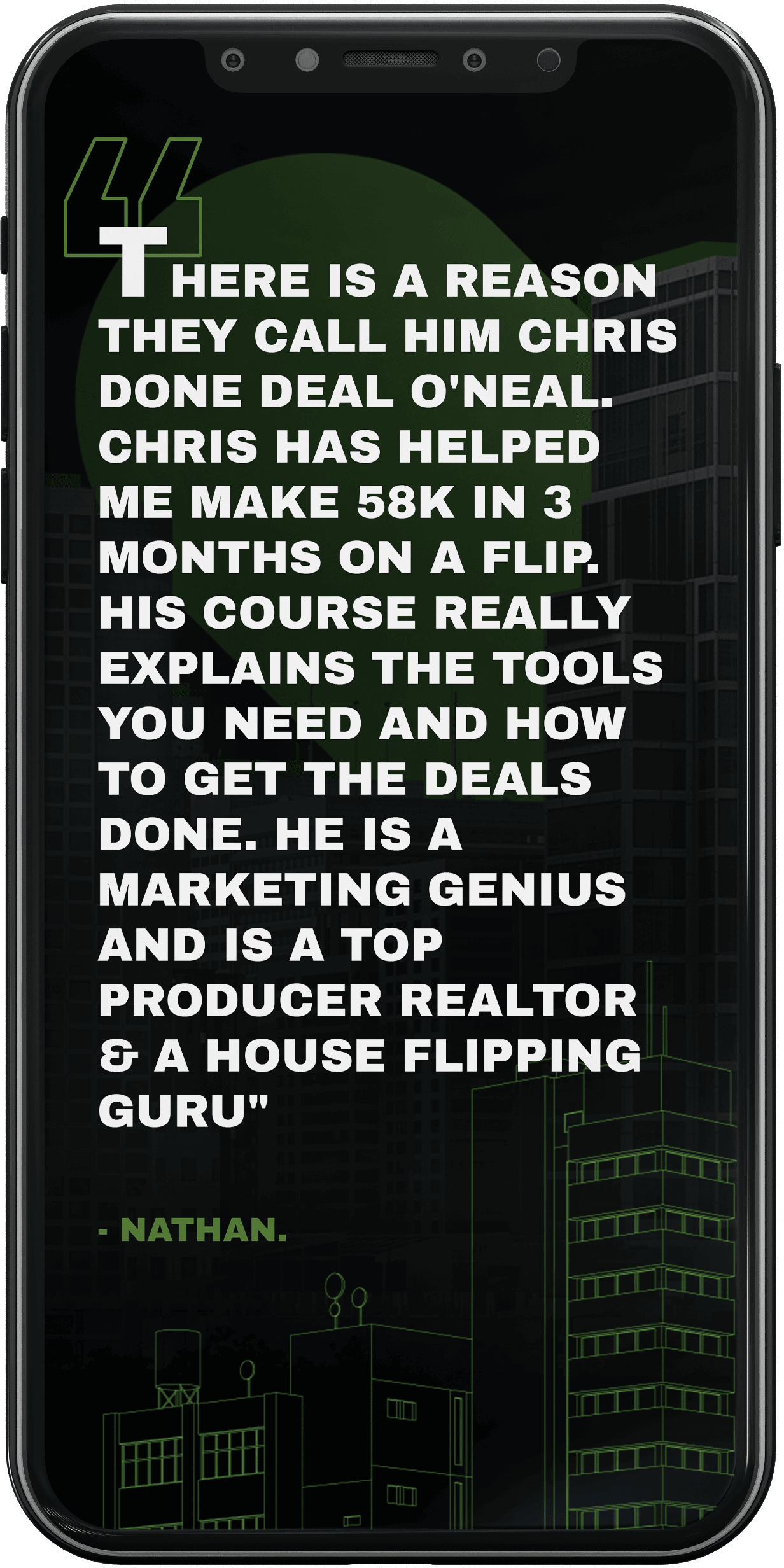 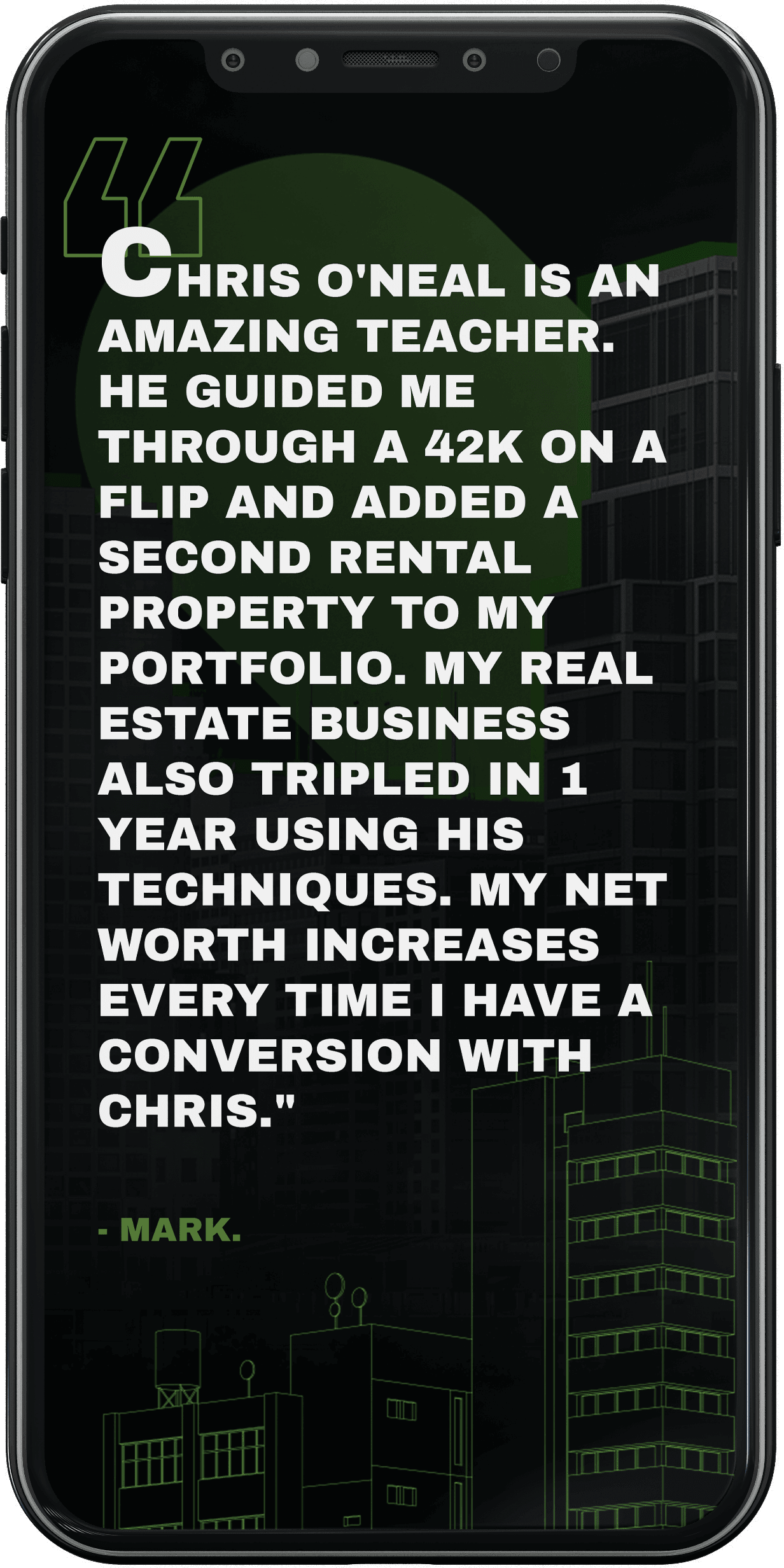 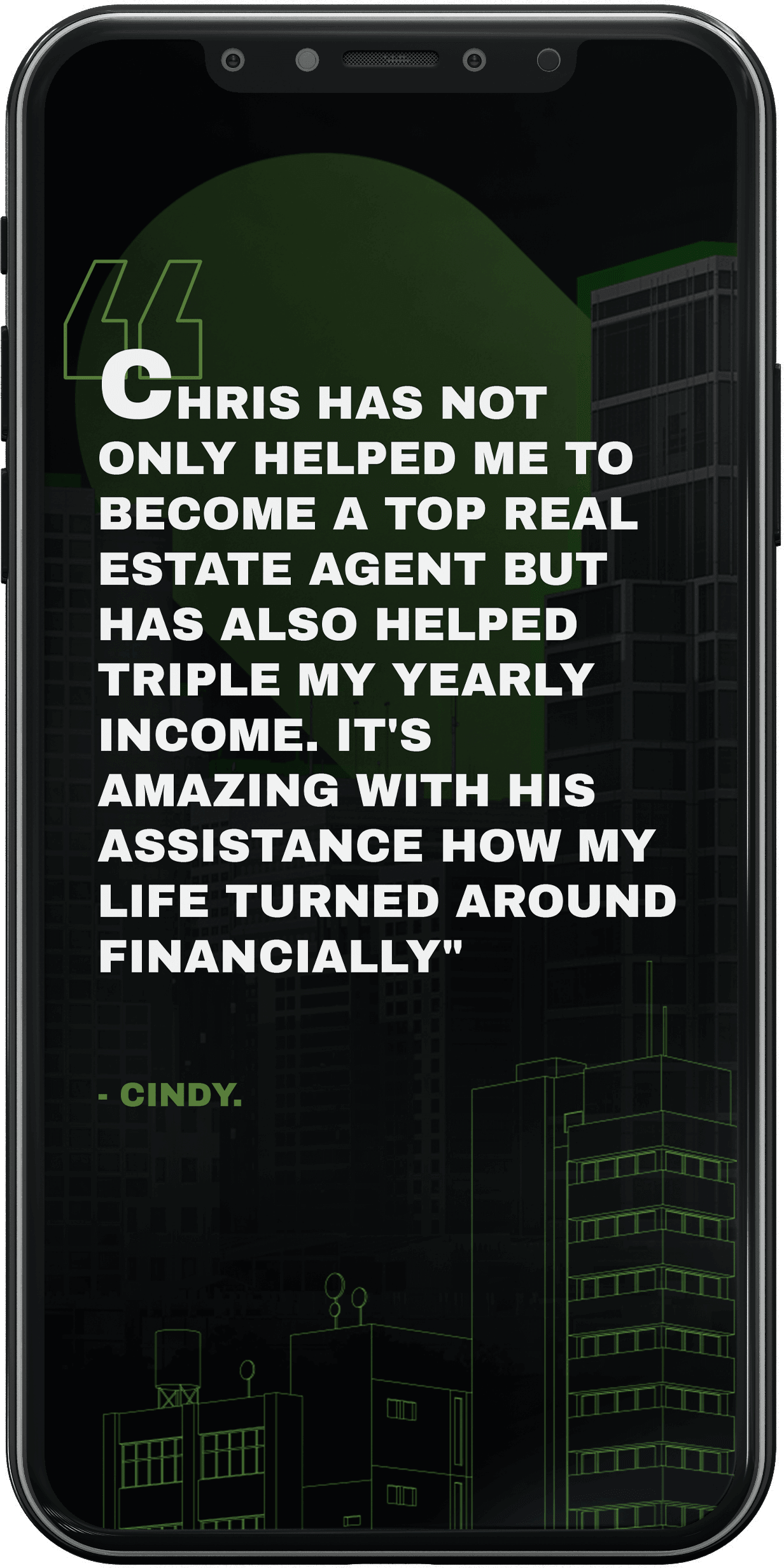 Im going to help you transition from Commission to🏡Acquisition.

...Even If You Have No Spare Cash, Investment Experience & Have Never “Fixed & Flipped” Before!
It’s time to Change my Life